This article displays some of the handy Peacock facts for kids that are not presented frequently. Basically there are two species of flying birds that belongs to the pheasant family and is known as peafowl. The male is identified as a peacock whereas females are called peahen; juveniles (chicks) are recognized as peachicks. Peacock is the national bird of India. More than three thousand years ago, Phoenicians brought several species to Egypt and used for several purposes including decorating.

These birds present a strange behavior in that they build nests on the ground and perch on the trees.

Facts about the Peacock’s Diet

Where do Peacocks live?

Peacock facts about its population are as follows:

There are around three main types of peacocks which are as under:

Following are the few peacock predators:

Peacock facts about its subspecies are listed below: 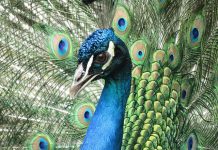